Today was a day for a visit to the city of Luxembourg! We both were really excited for the trip as we were going to a different Country only for a day. We woke up really early to catch an early morning train at 7:30am. The train ride was going to be 3.5 hours. We wanted to make the most of it by spending a good amount of time. Also we were going to leave for Berlin the next day so we wanted to be back in time.

The train was from Central Station which was a bit further off in the other direction as compared to Midi. It was 30min walk from our hostel. We walked to the station and confirmed our train and platform. With some time on our hand, we went to Starbucks for a coffee and also did a bit of people watching. In the past couple of we didn’t really see many people going to the office etc and it seemed a bit strange but the central station had a whole different vibe. We felt we saw the actual day to day life. We also saw Indians living and working there which was comforting.

We reached Luxembourg city at around 10:30am. We went directly to the tourist information office located in the station. We got a map and also some info on what to do for a day in the city. The old town was at a distance from the main station. We decided to walk rather than taking the bus as the best way to feel a city is on foot. We bought some snacks from a kiosk.

On our way we saw some big brands on the streets. The roads looked clean and everything was organised. Soon we realised we that it is a wealthy country. Our first stop was to ‘Balcony of Europe’. There used to be an advertising campaign in the 90’s for European Tourism and the picture advertised was taken in Luxembourg. We went to this place and clicked some photos. The walk in the streets was a quiet one. We didn’t see many activity. Due to the lack of tourists, we didn’t even see many amenities like toilets etc. Since Dee wanted to use the toilet, we were looking for something and saw a library/museum. Looked like it hadn’t opened yet so we just went upto the security and asked him if we could use the restrooms and he happily obliged.

We saw some tourists walking in a particular direction and tried to decipher the map to see where the actual city centre is. A few of them did look just as lost as we were. Soon we were on our way to the city centre. The first major stop was the palace. The Ducal palace is the official town residence of the royalty. It has one of the most beautiful facades with manicured hedges at the front and the royal guard cabin. There were guided tours available but since we were only there for the day, we decided to skip it and instead explore the capital in its entirety.

Luxembourg is the Justice capital of the European Union. The next stop on foot was the European justice building. We have a couple of lawyers in the family and thus we took a few photos for them to share on whatsapp. 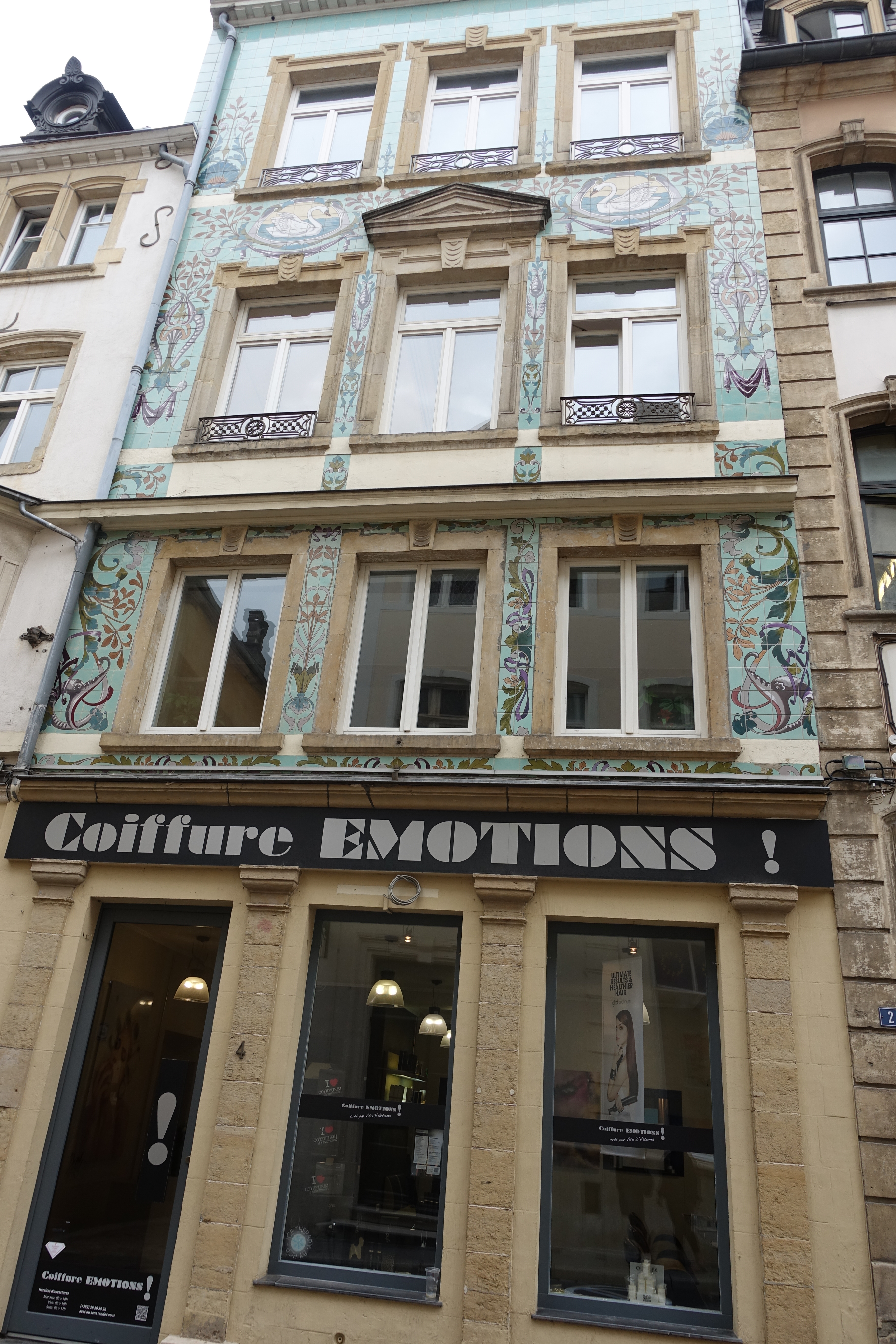 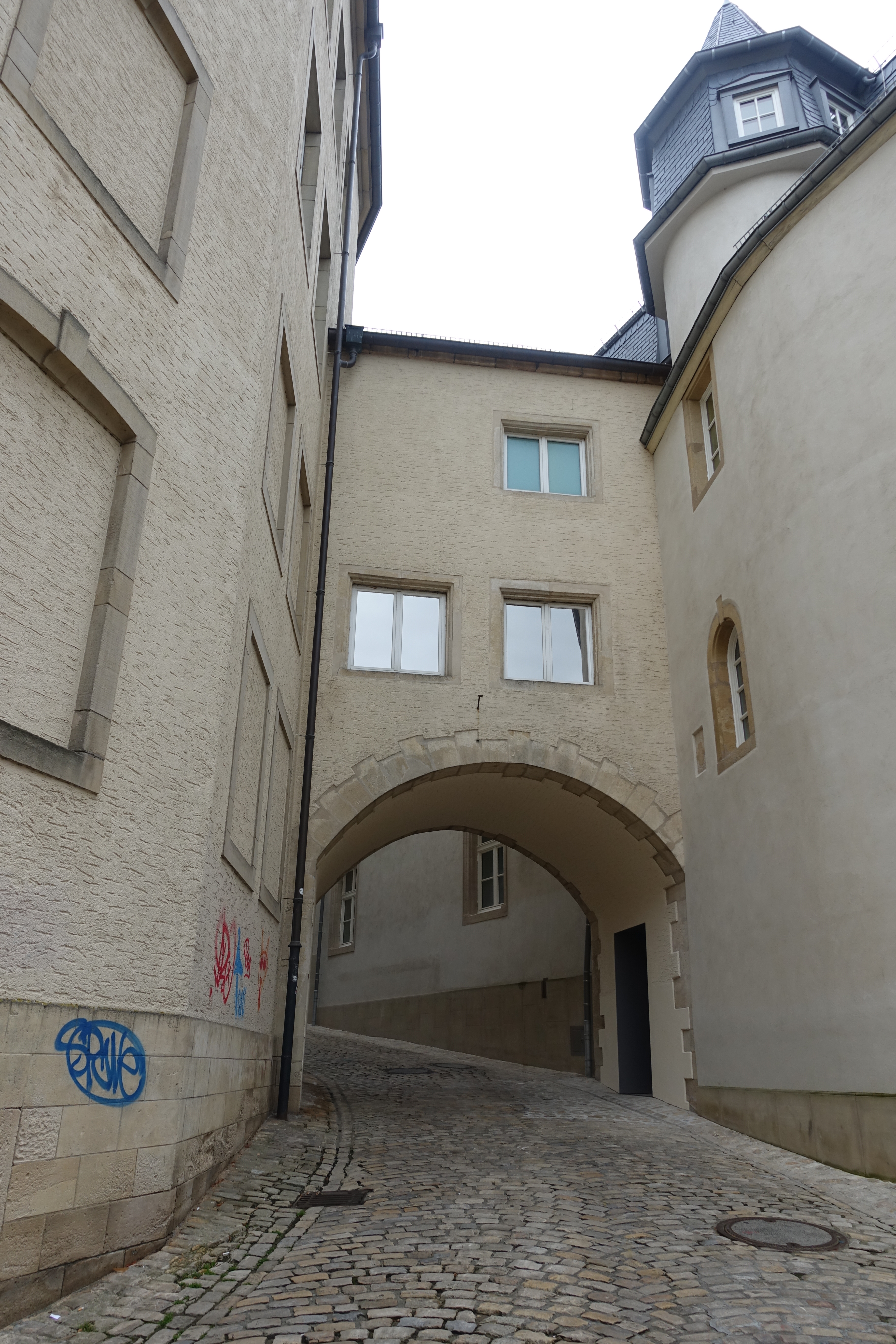 Further down we explored the narrow streets in the area. We walked on a narrow road passing through a tunnel which led us to the three towers. Across the road was a nice view point and we spent some time there soaking in the views. Form there we atrted walking towards the main square. We walked along the busy shopping strip where there was a bit of activity and quite a few high end brand shops. The street performance was very unique and entertaining.. I guess it was a Capella performance. Its amazing how a street performance can change the vibe of the place. All over Europe we saw some amzing and very unique performances and absolutely loved each one of them

On Grand Rue, there is this quirky and funny fountain sculpture Hammelsmarsch – which is, by the way, the artists’ self-portrait too, So it is a 3D sculpture with multiple characters playing musical instruments. Apparently, the artist is the one on the left hand side – and was originally facing a pharmacy. There was a particular reason why he chose to face that way! If you look closely, the artist is showing a middle finger to the pharmacist. The subtle message was to show his ‘don’t care’ attitude to the pharmacist who used to condemn his works. Interesting!

Walking along, we reached the main square where we saw a small supermarket with souvenirs and postcards. We did our routine purchases of postcards and fridge magnet and then went looking for a place to eat. Down the road we saw lots of people standing outside a restaurant/takeaway joint with a white wrapper in their hands. As a travellers thumb rule, in case of food – follow the crowds! It was lunch time and the crowd meant it was a place for the locals too! We went to this place and the choices were ample and amazing! The left hand side counter was selling all savoury stuff with a few vego options for me! While Jay was waiting in the queue, I couldn’t stop myself from going to the other side which had all these extremely well dressed pastries and sweet canopies! The French influence was certainly seen here in the patisserie! The display was quite pleasing to the eye! We picked up our panini lunch and decided to go the old square on the other side of the restaurant and savour our paninis there. We tried to look for a miniature wine bottle to wash down the paninis but all they had were full size bottles which didn’t appeal to us. We went to the old square and found a bench in a shade to enjoy our lunch while doing some essential people watching. While we were having lunch, a large group pf Chinese youngsters passed by. Our attention was drawn to this young couple. Like most Chinese couples, the boy was carrying the girl’s bag and also holding an umbrella to protect the beloved from the harsh sun. She suddenly decided to get on the skate board (probably because princess got tired of walking). As soon as she got on it – it skid and she had a bad fall. Everyone around rushed to help her…luckily she was fine! This and many more interesting characters definitely made our lunch more interesting! 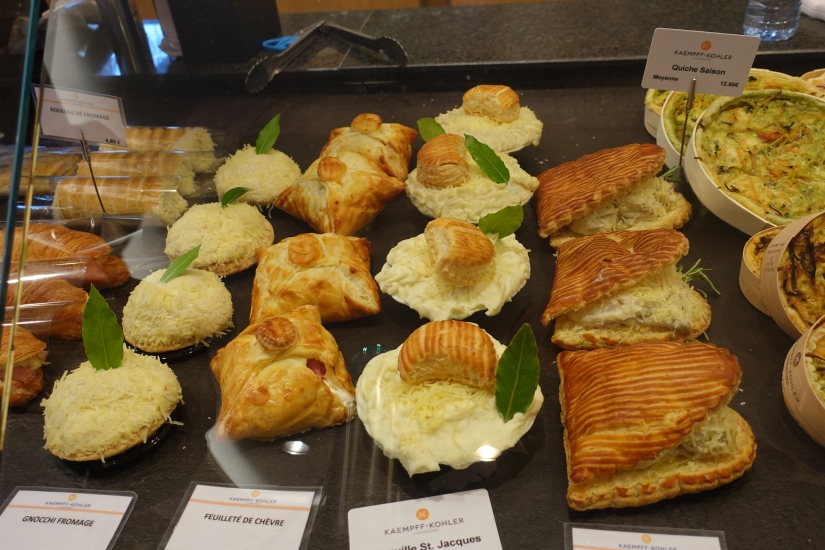 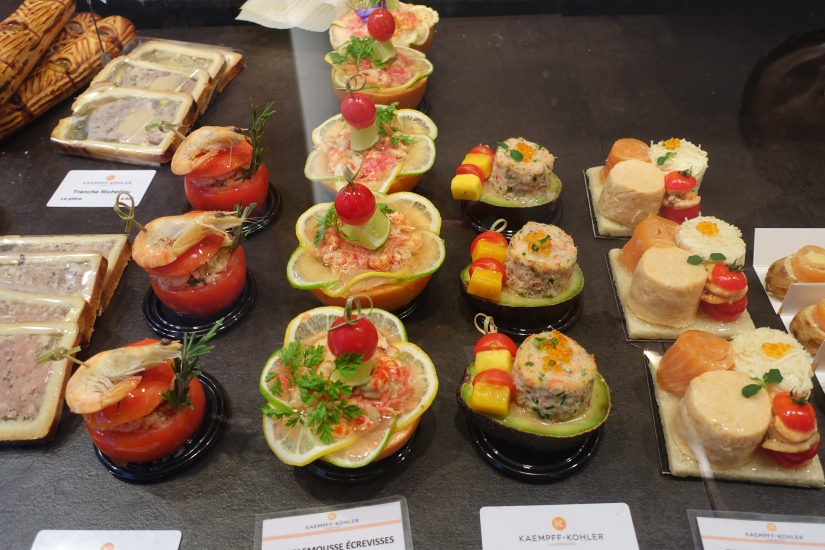 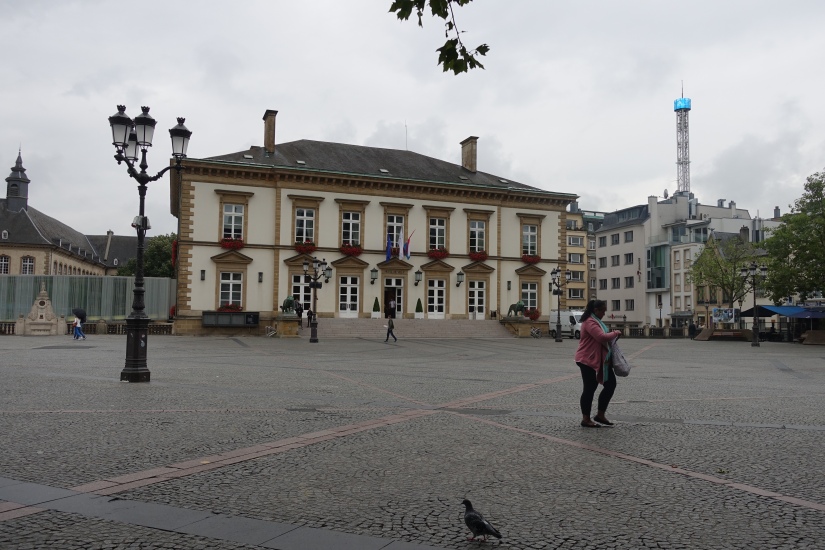 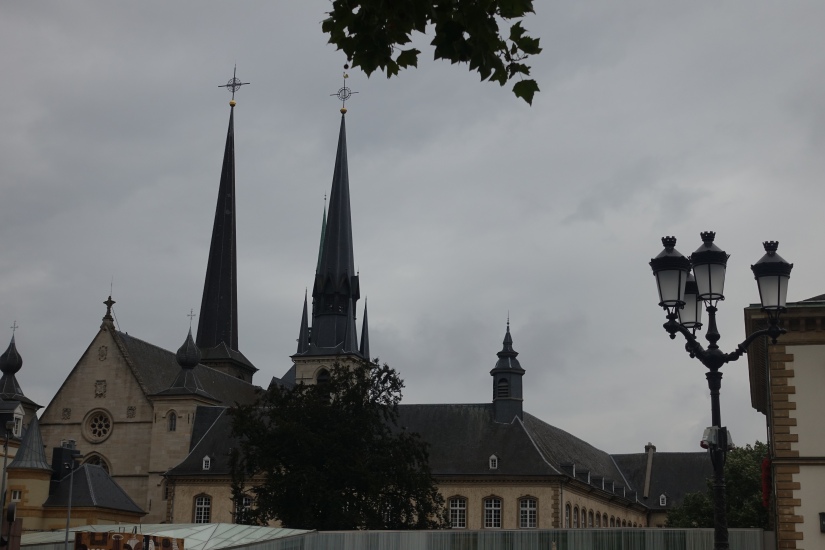 After lunch we walked towards the constitution square and got a nice view of the city. At this place there were many statues etc including of the lady with the wreath. Soon after it started raining so we ran inside a nearby church and admired its glass painted window. As it got better we sneaked out and went to a nice looking bistro for a coffee for me and beer for Jay. Played with the camera a bit striking pose and all as we had to kill some time before the rain stops completely.

After get rejuvenated with a cuppa, we decided to start walking towards the station and take the long route on the other side. On the way to the station we stopped at a few buildings and snapped some pics. 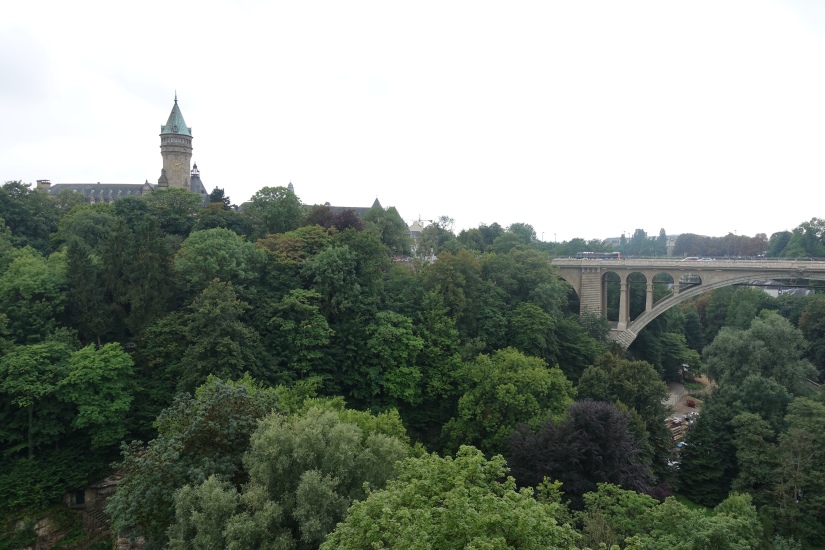 Just before catching the train, we wanted to make a visit to the loo and thus went in to Burger King. And my oh my! It was the dirtiest ever loo! Jay nearly fainted with the smell. Anyways…when travelling….there are times as such when you have to make do with the messiest of the toilets.

We picked up a baguette meal from the station before boarding the train as we knew we were in for a 3 hour journey and we would get hungry on the way. We were supposed to catch an early morning flight to Berlin the next day so we wanted to have an early night in too.

We reached the hostel well in time after a short walk from midi station. The Taiwanese girls had checked out and there was a Chinese couple who had checked in and we were sharing our room with. We just introduced ourselves and didn’t have much conversation. That’s it for the day folks!

We are a Indian Aussie couple of Indian background in our mid 30s. We are writing this blog to share our travelling experiences with our friends and loved ones and also for anyone who might find our experience useful to plan their our travels. We have travelled 26 countries and counting... View all posts by PlanSetTravel

This site uses Akismet to reduce spam. Learn how your comment data is processed.

We are a Indian Aussie couple of Indian background in our mid 30s. We are writing this blog to share our travelling experiences with our friends and loved ones and also for anyone who might find our experience useful to plan their our travels.